Forecast Cloudy – The Magic of AzCopy As Database Migration Tool

Here is a quick note that can be helpful to folks. Recently I had to migrate database to Azure via taking a backup from on-premises SQL Server and restoring this backup on SQL Server on Azure VM.  Now, there is a better , more structured method available for the same using Database Migration Assistant (DMA) from Microsoft – https://www.microsoft.com/en-us/download/details.aspx?id=53595 , however I went old fashioned way purely through backups.

But how do I move 800 GB backup quickly to the cloud? What about network issues and need to restart on network hiccup? All of these issues and more can be solved via AzCopy tool.

AzCopy is a command-line utility designed for copying data to and from Microsoft Azure Blob, File, and Table storage using simple commands with optimal performance. You can copy data from one object to another within your storage account, or between storage accounts.

So what I did first is created a File Share on Azure Blob Storage. Azure File storage is a service that offers file shares in the cloud using the standard Server Message Block (SMB) Protocol. Both SMB 2.1 and SMB 3.0 are supported. You can follow this tutorial to do so – https://www.petri.com/configure-a-file-share-using-azure-files . Next, I needed to upload my backup to this file share via AzCopy:

The basic syntax to use AzCopy from command line as follows

I can upload a single file, called test.bak , from C:\Temp to the demo container in the storage account (blob service) using the following command:

Once file copied ypu should see stats in command line as well:

Once file is uploaded from my destination Azure VM all I have to is map to the File Share (example here – https://blogs.msdn.microsoft.com/windowsazurestorage/2014/05/12/introducing-microsoft-azure-file-service/)  and restore backup. 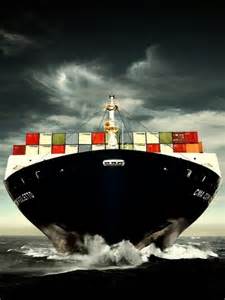 This topic is where I actually planned to pivot to for quite a while, but either had no bandwith\time with moving to Seattle or some other excuse like that. This topic is an interesting to me as its intersection of technologies where I used to spend quite a bit of time including:

Those who worked with me either displayed various degrees of agreement, but more often of annoyance, on me pushing this topic as growing part of data engineering discipline, but I truly believe in it. But before we start combining all these areas and do something useful in code I will spend some time here with most basic concepts of what I am about to enter here.

I will skip introduction to basic concepts of RDBMS, NoSQL or BigData\Hadoop technologies, as if you didn’t hide under the rock for last five years, you should be quite aware of those. That brings us straight to containers:

As definition states – “A container image is a lightweight, stand-alone, executable package of a piece of software that includes everything needed to run it: code, runtime, system tools, system libraries, settings. Available for both Linux and Windows based apps, containerized software will always run the same, regardless of the environment. Containers isolate software from its surroundings, for example differences between development and staging environments and help reduce conflicts between teams running different software on the same infrastructure.”

Containers are a solution to the problem of how to get software to run reliably when moved from one computing environment to another. This could be from a developer’s laptop to a test environment, from a staging environment into production, and perhaps from a physical machine in a data center to a virtual machine in a private or public cloud.

But why containers if I already have VMs?

VMs take up a lot of system resources. Each VM runs not just a full copy of an operating system, but a virtual copy of all the hardware that the operating system needs to run. This quickly adds up to a lot of RAM and CPU cycles. In contrast, all that a container requires is enough of an operating system, supporting programs and libraries, and system resources to run a specific program.
What this means in practice is you can put two to three times as many as applications on a single server with containers than you can with a VM.  In addition, with containers you can create a portable, consistent operating environment for development, testing, and deployment.

On Linux, containers run on top of LXC. This is a userspace interface for the Linux kernel containment features. It includes an application programming interface (API) to enable Linux users to create and manage system or application containers.

Docker is an open platform tool to make it easier to create, deploy and to execute the applications by using containers. 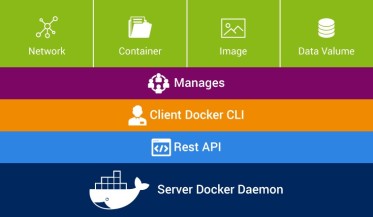 Finally deploying instances of images from your registry you will deploy containers. We can create, run, stop, or delete a container using the Docker CLI. We can connect a container to more than one networks, or even create a new image based on its current state.By default, a container is well isolated from other containers and its system machine. A container defined by its image or configuration options that we provide during to create or run it.

Some of the well known orchestration engines include:

Kubernetes.  Almost a standard nowdays , originally developed at Google. Kubernetes’ architecture is based on a master server with multiple minions. The command line tool, called kubecfg, connects to the API endpoint of the master to manage and orchestrate the minions.  The service definition, along with the rules and constraints, is described in a JSON file. For service discovery, Kubernetes provides a stable IP address and DNS name that corresponds to a dynamic set of pods. When a container running in a Kubernetes pod connects to this address, the connection is forwarded by a local agent (called the kube-proxy) running on the source machine to one of the corresponding backend containers.Kubernetes supports user-implemented application health checks. These checks are performed by the kubelet running on each minion to ensure that the application is operating correctly.

Apache Mesos. This is an open source cluster manager that simplifies the complexity of running tasks on a shared pool of servers. A typical Mesos cluster consists of one or more servers running the mesos-master and a cluster of servers running the mesos-slave component. Each slave is registered with the master to offer resources. The master interacts with deployed frameworks to delegate tasks to slaves. Unlike other tools, Mesos ensures high availability of the master nodes using Apache ZooKeeper, which replicates the masters to form a quorum. A high availability deployment requires at least three master nodes. All nodes in the system, including masters and slaves, communicate with ZooKeeper to determine which master is the current leading master. The leader performs health checks on all the slaves and proactively deactivates any that fail.

Over the next couple of posts I will create containers running SQL Server and other data stores, both RDBMS and NoSQL, deploy these on the cloud and finally attempt to orchestrate these hopefully as well.  So lets move off theory and pictures into world of parctical data engine deployments.

Hope you will find this detour interesting.

https://docs.microsoft.com/en-us/visualstudio/profiling/beginners-guide-to-performance-profiling .
Sampling is a statistical profiling method that shows you the functions that are doing most of the user mode work in the application. Sampling is a good place to start to look for areas to speed up your application.

At specified intervals, the Sampling method collects information about the functions that are executing in your application. After you finish a profiling run, the Summary view of the profiling data shows the most active function call tree, called the Hot Path, where most of the work in the application was performed. The view also lists the functions that were performing the most individual work, and provides a timeline graph you can use to focus on specific segments of the sampling session.

Sampling is the most common method to application profiling, there are other methods as well, but they may come with more performance overhead or require more application instrumentation.
Make sure you enable appropriate settings when publishing your application to Azure 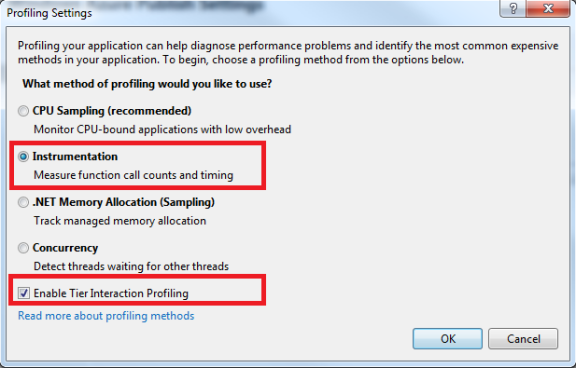 Once you ran your profile you can now view profile reports. To get them do following

Recently again looking at some GC issues on IBM Websphere platform for a buddy of mine I got to learn new tool – Pattern Modeling and Analysis Tool for IBM Java Garbage Collector (PMAT). This is second post-mortem IBM analysis tool I had priviledge to work with from IBM , as I previously profiled JCA – Javacore Dump Analysis Tool here https://gennadny.wordpress.com/2016/03/28/javacore-dump-analysis-using-jca-ibm-thread-and-monitor-dump-analyzer-for-java/ .

Why do we need it?
When the JVM (Java virtual machine) cannot allocate an object from the current heap because of lack of space, a memory allocation fault occurs, and the Garbage Collector is invoked. The first task of the Garbage Collector is to collect all the garbage that is in the heap. This process starts when any thread calls the Garbage Collector either indirectly as a result of allocation failure or directly by a specific call to System.gc(). The first step is to get all the locks needed by the garbage collection process. This step ensures that other threads are not suspended while they are holding critical locks. All other threads are then suspended. Garbage collection can then begin. It occurs in three phases: Mark, Sweep, and Compaction (optional).

Sometimes you run into issues, most common are either performance issues in applications due to especially long running , aka “violent” GCs or rooted objects on the heap not getting cleaned up and application crashing with dreaded OutOfMemory error and causing you have to analyze Garbage Collection with Verbose GC on. 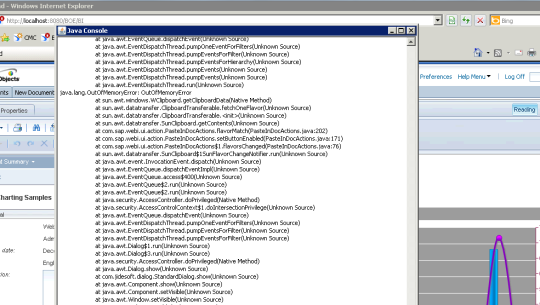 How does it work?
PMAT analyzes verbose GC traces by parsing the traces and building pattern models. PMAT recommends key configurations by executing a diagnosis engine and pattern modeling algorithm. If there are any errors related with Java heap exhaustion or fragmentation in the verbose GC trace, PMAT can diagnose the root cause of failures. PMAT provides rich chart features that graphically display Java heap usage.
The following features are included:

Where do I get it?

Running the tool
Run gaNNN.jar with the Java Run-time Environment. (NNN is the version number).
You will see following initial screen

More detailed information on the tool can be found in presentation here – http://www-01.ibm.com/support/docview.wss?uid=swg27007240&aid=1

Jinwoo Hwang was technical leader at IBM WebSphere Application Server Technical Support that created this tool, as well as JCA. I recommend that everyone reads his articles on JVM internals – http://websphere.sys-con.com/node/1229281, http://www-01.ibm.com/support/docview.wss?uid=swg27011855 , http://www-01.ibm.com/support/docview.wss?uid=swg27018423